Saturday night, the moon appeared in a dress rehearsal
preparing for a spectacular event_
Lunar Eclipse of the Full Blood Moon. 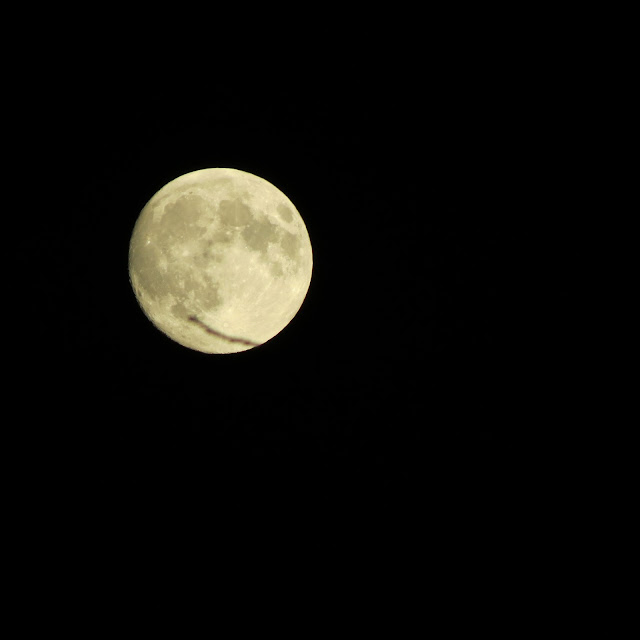 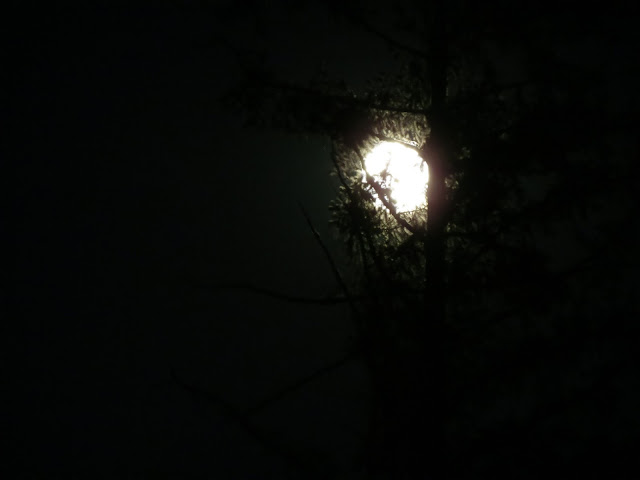 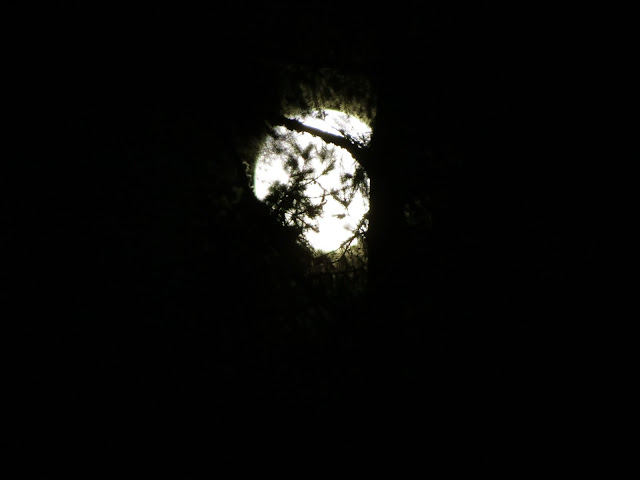 Last night she put on quite the performance 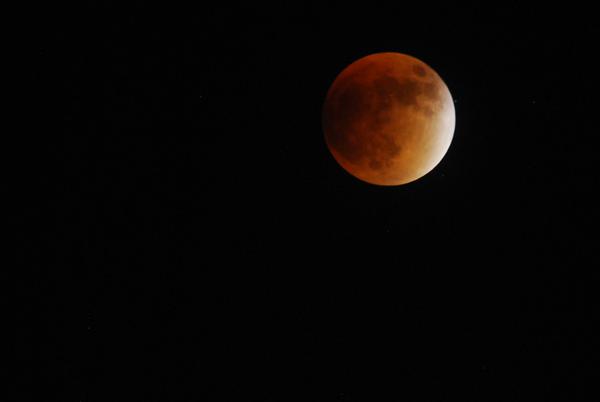 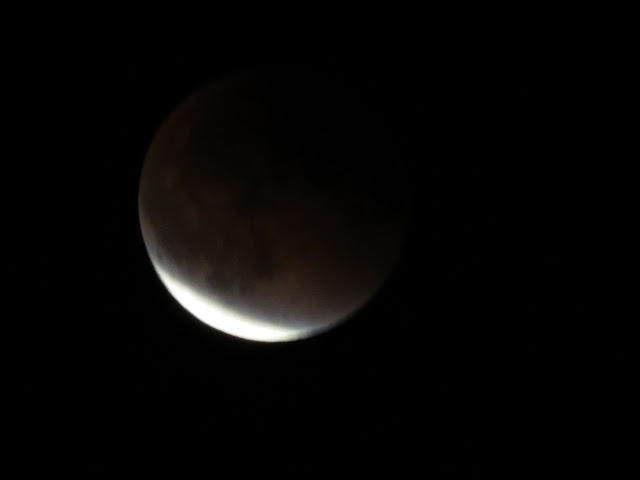 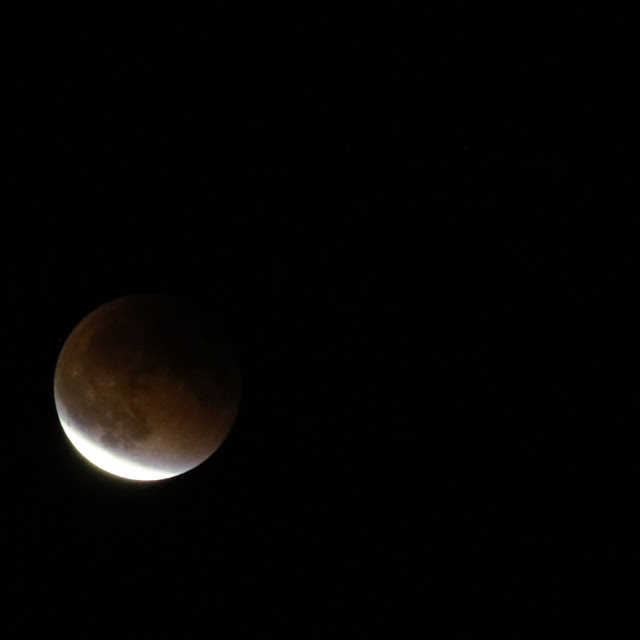 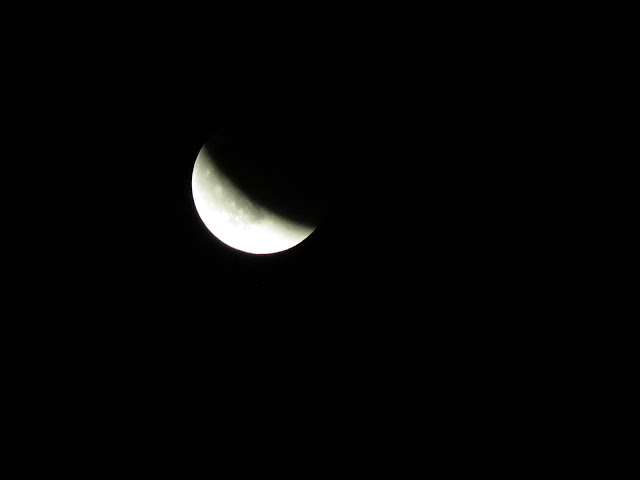 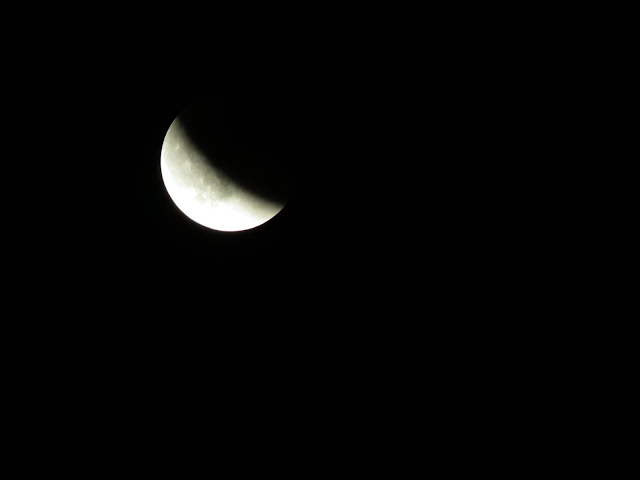 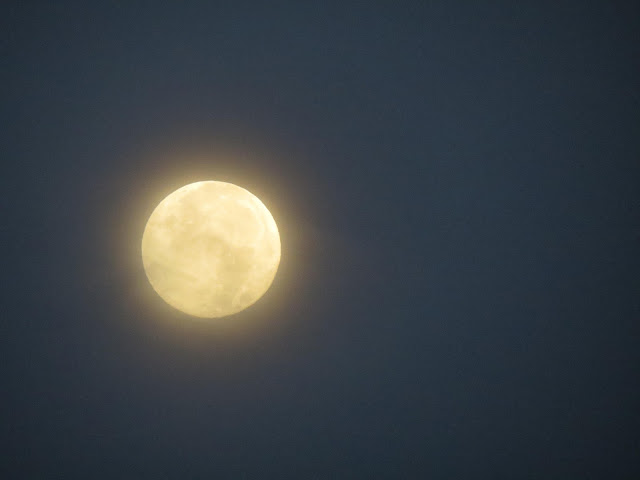 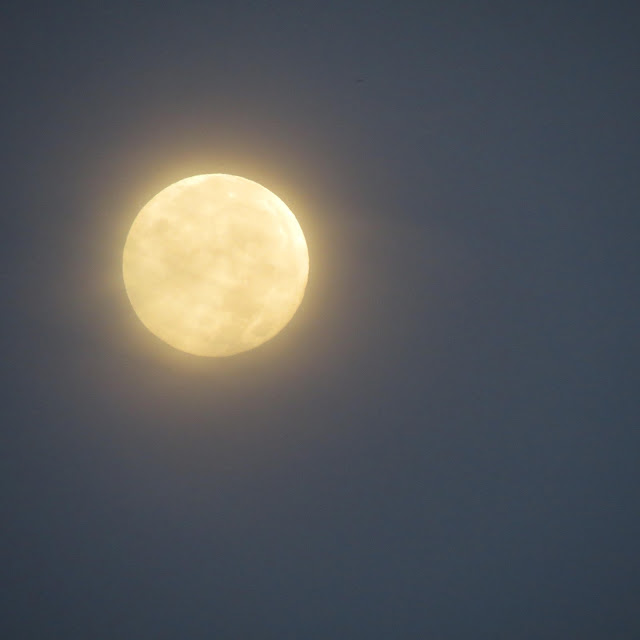 Listening to the sound of thunder as we worked to put the summer fruit and vegetable gardens to bed yesterday, we kept hoping, praying for the rain that has been continually forecast but never appears. Thankfully we awoke to a bit of the promise this morning.

Our summer has been hot and dry and with record heat in June and July, and unless the rainfall picks up substantially, we will not come close to the average annual rainfall of 46 inches.

The vegetable garden has been winding down for some time. Farmers market spokesman indicated that which we have experienced: the unusual heat brought about an earlier than normal harvest and now most things are gone, whereas in prior years we have harvested such things as tomatoes well into October.

We still have sweet peppers on the vine, but most turned their color in August. Green beans are long gone and earlier this summer the heat took it's toll on the majority of brassicas with an unbelievable infestation of aphids. I sprayed with Neem oil, but those buggers just moved to the next plant; once the cabbage was removed (most of which had to be tossed), they began working on the Brussels sprouts and then the broccoli.

We would have loved to have a few more of our favorite Armenian cucumbers, but with the colder night temperature _ 40's_ the vines have powdery mildew developing, as do the squash and zucchini. Nearly all have been pulled and discarded. Even the tomatoes say we are done.

The remaining apples were picked from the ground and trees, and the deer were happy to partake of some of them. Most of the vegetable plants have been dealt with and we are looking at a rather sparse slate so early in the year.

A few of the raised beds have been prepared for fall planting: garlic will soon find its way into the soil; newly planted lettuce is coming along, and the kale continues as does the fall cabbage. And despite the heat of the summer, the flowers continue to color the landscape. Drought tolerant plants, ornamental grasses, and established shrubs say no problem.

Devastating wildfires in the Pacific northwest have consumed more than one million acres, while over 7 million acres have been destroyed in 5 states. The loss of lives, homes, wildlife... is unimaginable. Although we did not have many fires in our area, we did experience days of low visibility and terrible air quality especially as winds shifted from the northeast.

The good news is that most of that is behind us and we continue to do what we do and deal with the hand dealt. The landscape garden thrives as these most recent photos show. Friends and family are in our lives and we are blessed with each day.

Speaking of special: blogger friends from Tennessee traveled out of their way to visit us here in early September. We prepared a special lunch of fresh wild Alaskan salmon (made into cakes) and lots of goodies from the vegetable garden. I have a few photos below, but you might also want to visit Larry, the Big Dude's site and enjoy his journey across country with his beautiful wife Bev and sister-in-law Pat. 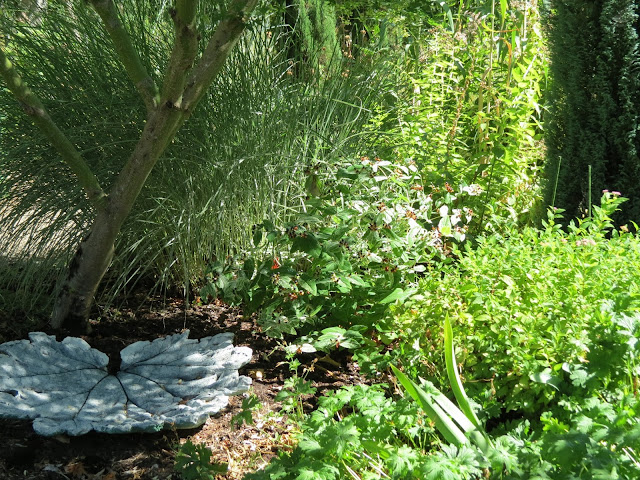 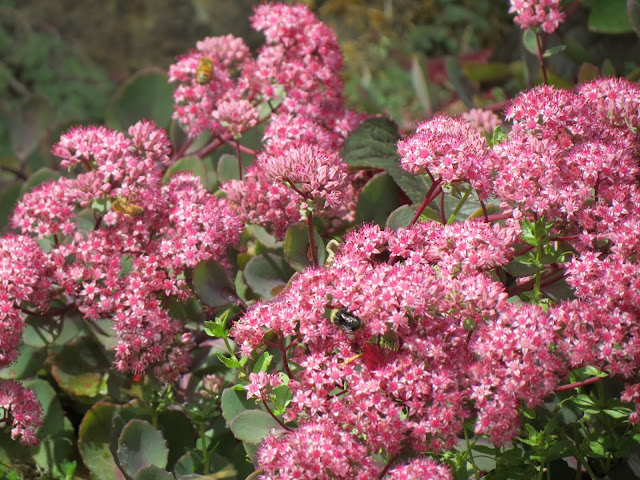 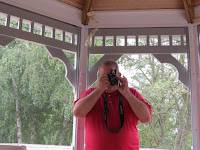 What a fun visit we had_ short but sweet. It was like we had known one another for years.

We have only 3 apple trees, but they do provide: dehydrated, frozen for our morning shakes; stored in bags and refrigerated should hold for a couple months; applesauce, apple crisp, apple cake; to family, neighbors, the Mission ... any other ideas? 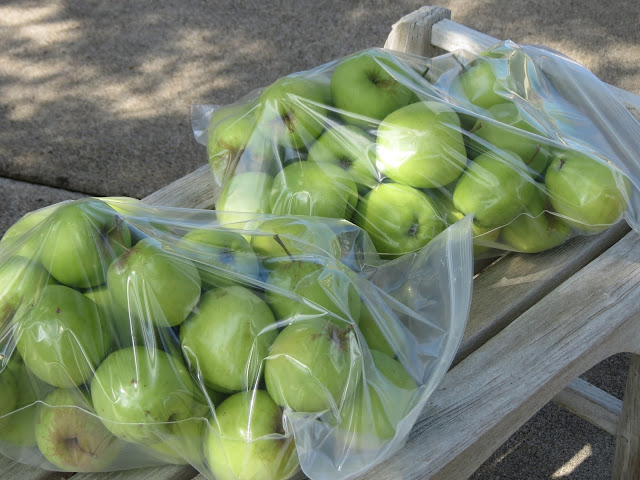 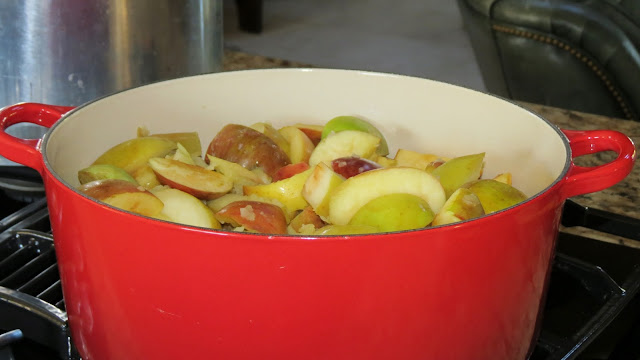 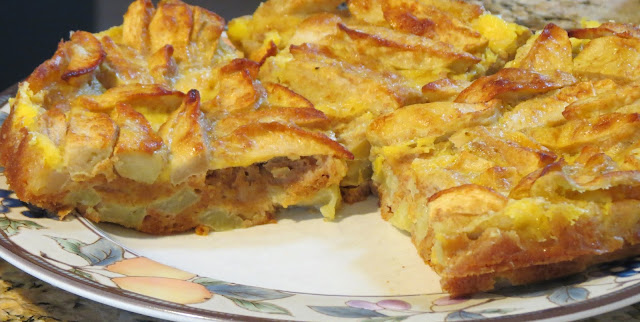 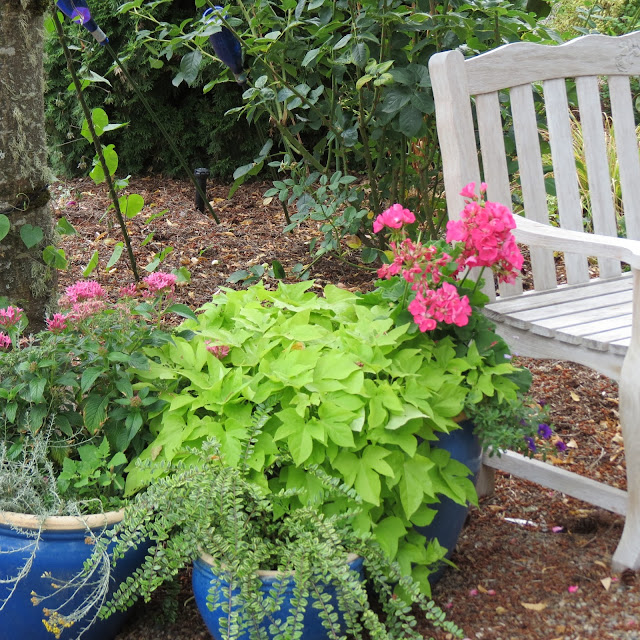 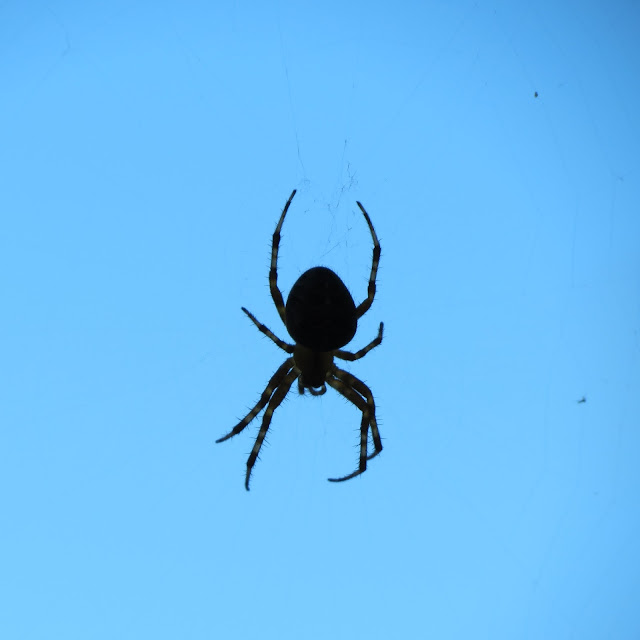 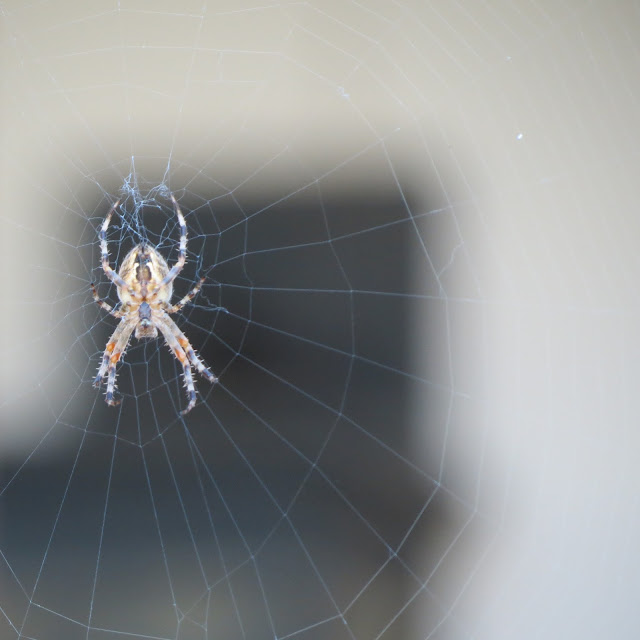 The beauty of this area is that none require water_ the ornamental grasses, sedums, rudbeckia, echinacea, phormium, Mexican poppy, lavender... 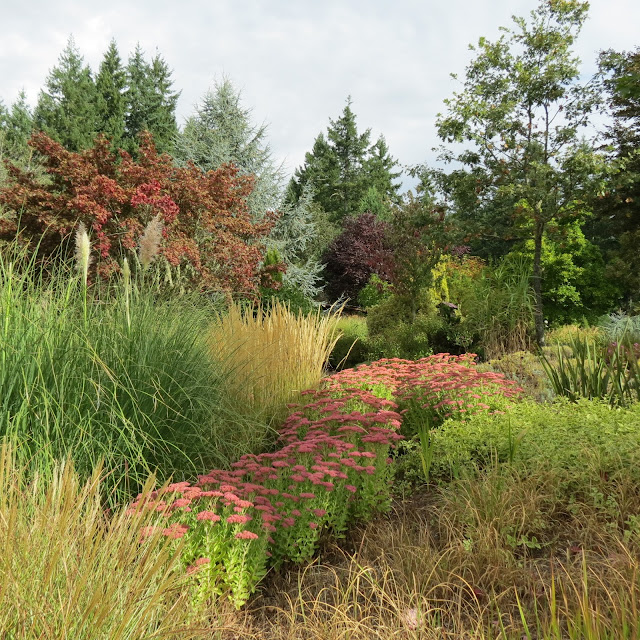 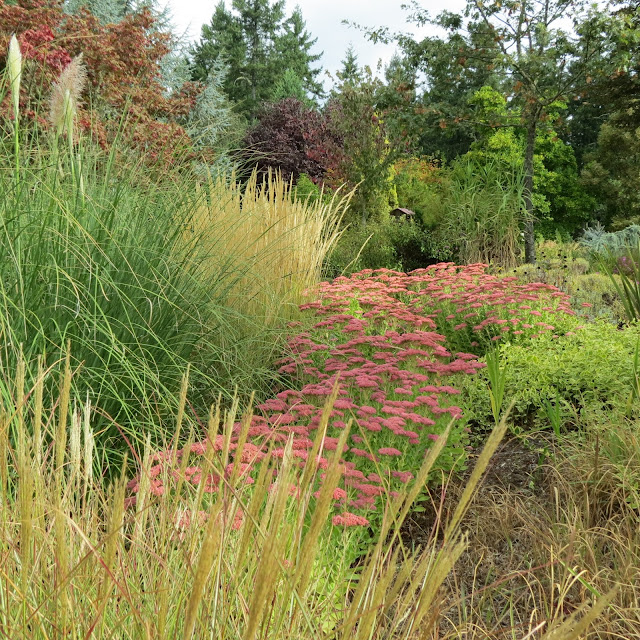 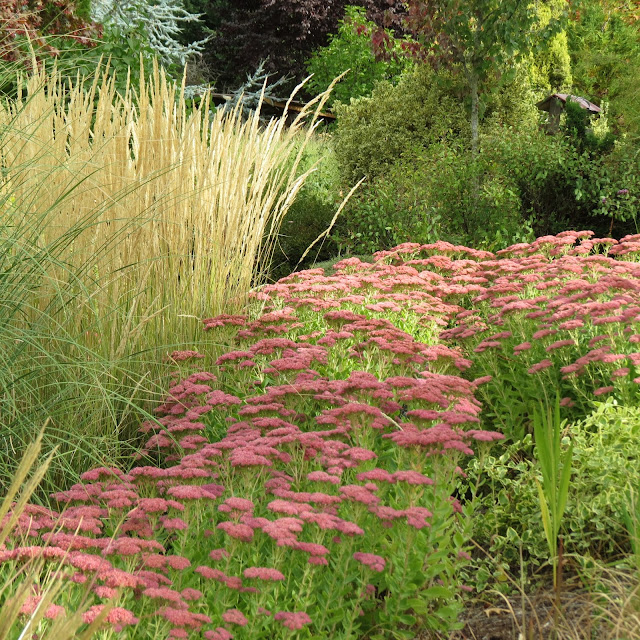 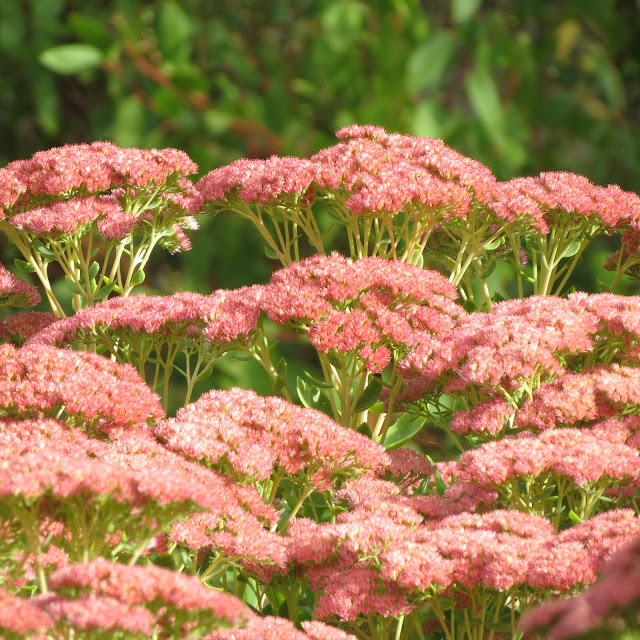 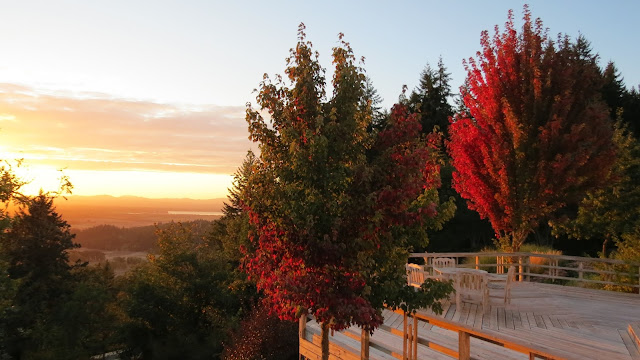