Outside my studio window is this little room: lavender-lined to the left, and a curvilinear array of yarrow, Coreopsis verticillata 'Moonbeam', Euonymus fortunei ' Emerald 'n Gold', a weeping cherry (Prunus subhirtella) left of the bird bath in the far corner; Spiraea prunifolia 'Bridal Wreath', Abelia grandiflora, and a periwinkle painted bench (hidden by the Caryopterus on the right). (photo taken several years ago in May) 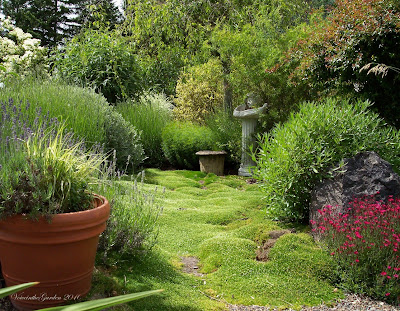 There has been a love-hate relationship with the cherry: following a beautiful Spring flush of lovely pale pink blossoms upon the pendulous and weeping branches, part of the tree would simply die off. My ongoing discussion (negotiation) with this tree was, "If you do this next year, you're outa here", and the following year it seemed to be okay (wink); additionally we did constant combat with the root suckers. Speaking of patience! After about 15 years of threatening, we finally cut it down last fall with the exception of a 4 foot stump, but with no vision as to what will be done with it. Now planted to its south side is a maple with great potential, slow growing but whose habit otherwise is welcome.

Friday morning I worked at my computer and occasionally observed the birds at the suet feeder, which is within several feet of the house and slightly left of the room, when suddenly the activity ceased - the birds were gone... silence followed. A flash, and upon the stump was this. Shortly thereafter into the shrubbery he dove. 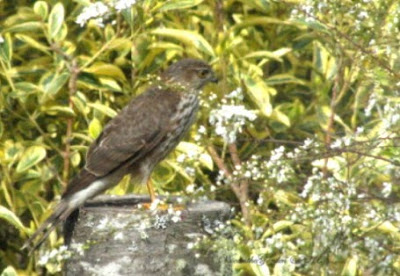 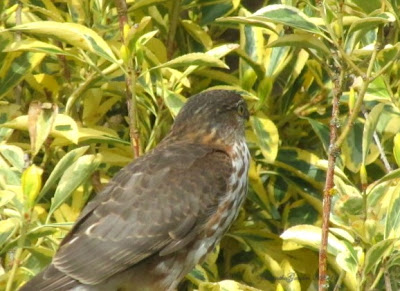 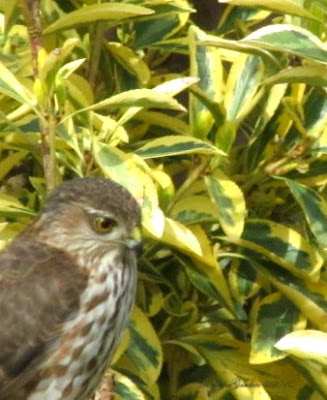 Yesterday morning he came again and it was a repeat performance. In fact throughout this day as my husband and I worked in the garden, he frequented the same cherry tree stump on several occasions. Quite bold he is: while taking a wheel barrow load of cuttings back to the pile, he flew right past me and headed for his favorite hunting ground. I know he has to eat, but I'm not particularly keen on having him feast upon the little Juncos and Chickadees morning, noon, and night, and especially not on my watch. 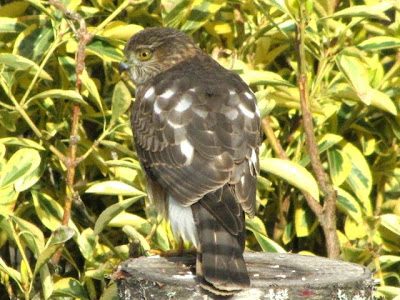 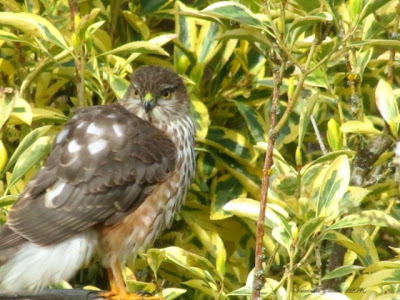 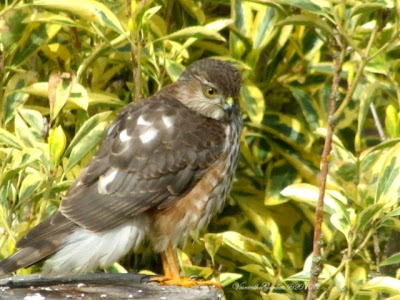 Putting that aside, he is a beautiful creature, similar in appearance to this adult Cooper's Hawk I wrote about several months ago, but I believe it to be the Sharp-shinned Hawk (Accipiter striatus). The two can be difficult to tell apart, but after much research I do believe it is the latter. Those of you more expert than I might venture its identity.

Characteristics of the Sharp-shinned Hawk (one of the sources: CornellLab of Ornithology):

- a relatively smaller head when compared to the Cooper's;
- feathers are dark from the top of the head, down the nape and to the upper back;
- heavy striping of the breast extends nearly to the tail, and the rufous horizontal barring in the feathers appear at the lower belly;
- although the banded tail is slightly rounded, the tail feathers appear to be of equal length;
- legs appear to be very thin, and
- the yellow eyes confirm it is a juvenile whereas the adult's eyes are red (in both the Cooper's Hawk and the Sharp-shinned).
Posted by D at 8:45 AM