We took advantage of a beautiful yesterday, working outside and enjoying the cool breeze, the warmth of the sun, and a pause for lunch in the gazebo. We have had so much rain, unusually hard rains, and with only intermittent periods of sunshine.

While returning home on Saturday, my husband was listening to a radio wine interview show in Oregon: the spokesperson was voicing concern about the amount of rain/lack of sun we have had relative to grape crops and the plant's ability to put on blossoms in order for there to be a good harvest. He stated that if we do not see an 80 degree day by the 10 of June, it would be an historical event. Since that happens to be 2 days from now and with today's cloud cover and rain forecast the next 2 days, we may experience history in the making. I enjoy history, but that kind is not music to my ears. He added that the weather is shaping up to be like 1983, a year without summer, and everyone is quite concerned, as are we, for harvests of all kinds, and especially our vegetables.

Early in the Spring we started more varieties of seeds, thus expanding the garden, and to say the least, strange things have occurred. April saw some 70 degree days and plants responded with beautiful growth - summer must have arrived, but with night time temperatures periodically nearing freezing over the course of several weeks, the plants began bolting - fall must be approaching. A similar fluctuation in temperatures occurred in May.

Sugar snap peas have just now put on blossoms.
Many of the Bush beans that were about to emerge several weeks ago are no longer.
Shanghai Bok Choy bolted in one of the raised beds, but those I planted in the main garden and several weeks later, came on beautifully.
Broccoli (Packman) was harvested over a week ago, and we continue picking the smaller side shoots as they grow, but there is no sign of any cauliflower, planted at the same time as the broccoli and in the same bed, but with massive foliage only.
One head of cabbage is ready to be picked, but others are either far behind or have barely begun to form, and again, all planted at the same time.
Peppers are forming and doing well, but I have kept them indoors. 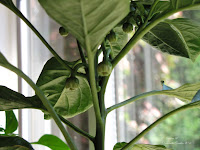 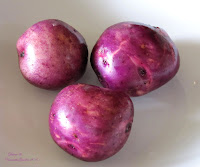 The potatoes are still growing in pots and have not yet blossomed. How could they without sunshine? For the most part all seem to be doing well, except for two of the containers: the Purple Viking foliage was dying, so we decided to empty one and found not many (slightly less than one pound), but a beautiful purple-skinned potato with pink splashes of color. Since a few of the tiniest were still clinging to a vine, we repotted them in 4 inches of soil. Let's see if we can start the process again.

The greens have been robust due to the rain and cooler temperature. And look at that beautiful 'Merlot' (lettuce).

* Note: Having enjoyed some of the produce are neighbors, as well as friends who joined us for dinner over the weekend. I am still amazed at how so few seeds yield such bounty. I wish we could share some with Thomas at A Growing Tradition who gave us those seeds, but if you look at his amazingly productive garden, my guess is he won't be needing any of ours.

It is what it is I often say. Not much can be done except be thankful for the amazing harvest thus far. Currently being forecast for our area: beginning Saturday, a stretch of sunny skies with a pop to 78 degrees, then to 70. Let's see how that goes.

As I came up from the garden yesterday, my little buddy here paused for a photo op, and we conversed a bit, but when I gave him my normal ka-cow-cow, he seemed to be saying, that's not quite it. Or with that look he gave me, was he saying you're weird lady, talking to a quail?

Don't you just love that forward curving black plume of the California Quail? 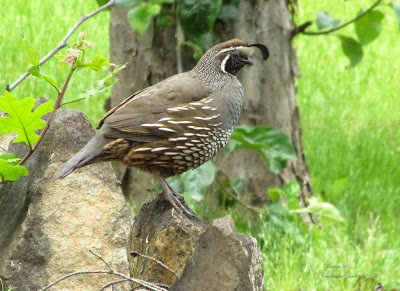 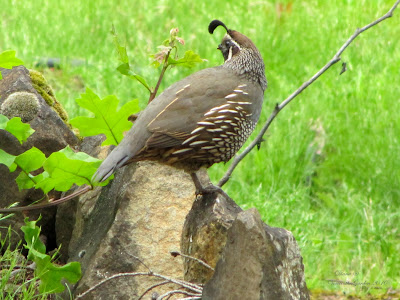 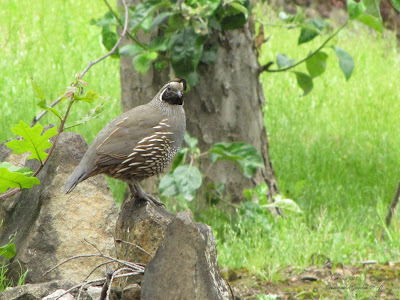 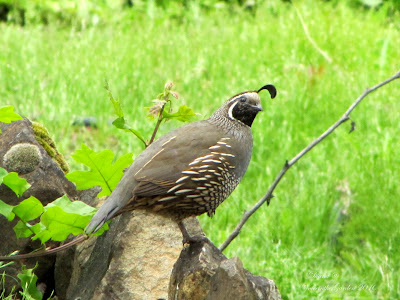 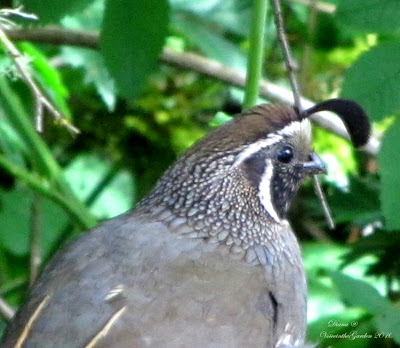