It's Still About Tomatoes

Between Thursday and Saturday we picked another 44 pounds of tomatoes, and with last night's low of 34 degrees F, we are harvesting what we can. What am I doing with all these tomatoes? Eating lots of fresh ones with just a touch of salt, but the majority have been roasted and frozen for winter use, and made into special dishes, like I have done for years.

Remove the top core of the whole fresh tomatoes, and give each a squeeze to release some of the juice and seeds. Place them into a large roasting pan or Dutch oven.

Sprinkle with some Kosher salt and a little freshly ground black pepper. Add the garlic cloves, basil, drizzle with extra virgin olive oil, stir and bake uncovered for 1 1/2 to 2 hours.

Set aside and allow it to cool to the touch; remove the skins, taste for any additional salt or pepper and do taste it, for the flavor of heirloom tomatoes is wonderful!

e cheese, yogurt, sour cream... ), label your lid, and freeze. It is a most flavorful base for so many things: we use it in soups, stews, sauces, dressing... and we enjoy making tomato soup all winter long.

Sweet and Hot Peppers, the last 11 pounds were harvested, and with many of them I made Pipiraini (and be sure to roll the "r"). You don't know what that is? Well, first, I hope I spelled it correctly for it does not appear in any of my searching. This was something my Lithuanian grandmother (Bobu) made at the end of the season with onions, peppers and tomatoes.

In a dutch oven or skillet, add onions in a little extra virgin olive oil, add touch of salt and ground black pepper and saute for a few minutes. Add garlic (she didn't use it), sweet peppers, and some hot peppers, and continue to cook a few minutes more. Add fresh chopped tomatoes and simmer until it is reduced to a nice sauce, about half hour to 45 minutes.

Served as a side dish or atop an omelet, hamburger or simply with a slice of multi-grain bread... you decide. Additionally, how much heat would you like? The first batch made had two Hot Hungarian yellow wax peppers and the next batch had three. 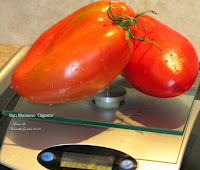 San Marzano 'Gigante'
I mentioned this tomato in this blog, and after processing more yesterday, cannot say enough about how wonderful this tomato is. I even saved a little extra seed in case somebody wants to try them.

They lay on the countertop for a few days, and when I cut into them I could not help but take a taste of a few: plump and sweet and so delicious. I had a batch of Romas that I roasted (pictured above), and they are good tomatoes; seeds have been saved, but I plan on several San Marzanos and again one Roma for next years garden. 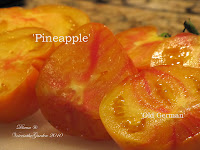 I dare you to taste test the difference. (wink) My husband and I decided to do that last night. We added a touch of salt, allowed them to sit a bit, and after trying each of the two several times, he said this reminds me that technically tomatoes are a fruit. Sweet and so delicious, these two heirlooms, both indeterminate, look almost identical: large beefsteak, 1 to 2 pounds each, meaty and juicy golden tomatoes with reddish streaks, rich and full bodied like a fine Merlot (not really the last element).

I will mention again that the Old German has barely produced in our garden this year (we are blaming it on the weather), but for the second year in a row, Pineapple has yielded an abundant crop.

Dark green rind and a sweet and juicy pink interior, Sugar Baby weighed in at slightly over 9 pounds and measured 8 1/2 inches in diameter.

This was the first year we tried growing melons. I started just two plants from which 3 melons developed: our kids got one, we enjoyed it, and our friends have the other. Will I grow it next year? Perhaps, but would do so with a black plastic ground cover to help heat the soil; likely our cooler gardening year was not conducive to a good melon environment. I do have seeds should anyone care to try their hand at it.
Posted by D at 3:40 PM