September Harvest Total (in pounds) = 122.82 lbs
Year to date = 435.70 lbs
Apples 3.5
Broccoli 4.4
Cauliflower 1.2
Green Beans 3.09
Cucumbers 15.05
Eggplant 4.64
French Orange Melon 9.6
Pears 11.21
Hot Hungarian Yellow Wax Pepper 4.0
Sweet Peppers 0.75
Strawberries 1.85
Tomatoes 43.07
Zucchini 20.46
As for October: interesting is that tomatoes harvested in the entire month of September totaled 43 pounds, whereas the last several days I was tied to the kitchen processing nearly 64 pounds that I picked on Friday alone. First we had few and then there were many. All we needed were those days of sun and high temperature. (not pictured and in a separate container were the Pineapple tomatoes, for I could barely lift this one into the wheel barrow) 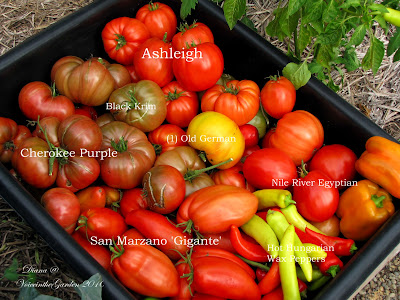 Due to our unusual cold and rainy June, we had no tomatoes until the month of August: cherry tomatoes ripened the first part of the month, but heirlooms delayed ripening until the end. And now it seems that the garden will be winding down as last nights temperature dipped to below 40 degrees F. Where was our summer? 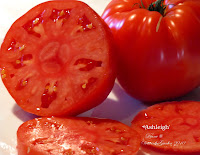 Heirlooms Nile River and Ashleigh (pictured right) were the first tomatoes to ripen, but the former has since disappointed. Also curious is that heirloom Old German has produced only one tomato this season! For now I will blame neither seed nor plant, but rather this unusual gardening period.

San Marzano 'Gigante' fruits (left) are not as large as I expected, but the tomato is beautiful and with a taste so sweet, as is the one Roma we planted. I see a nice marinara sauce in our future. 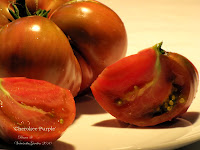 Cherokee Purple (left) had little showing in August but came on strong at the end of September as one of the top producers along with Ashleigh.

Russian Black Krim did not yield as heavily as last year, but I love the tomato. 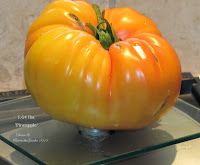 Heirloom Pineapple is a great performer! A sweet and beautiful yellow tomato with red-orange stripes, lower acidity, it is one of my favourites. A friend telephoned the other day to invite us to dinner and requested, "If you are going to start the 'Pineapple' tomato again next year, I'm placing my order now. It is the best tomato we have ever planted."

Will I start all these same tomatoes next year? Yes, I do believe so as I am currently collecting seeds. Plus, I want to give those that didn't do so well a second chance.

Note to self: remember to plant only 1 of each of the following: lemon cucumber, yellow squash, and zucchini

Oh, and look who kept me company while I picked vegetables the other day.
Isn't he handsome? 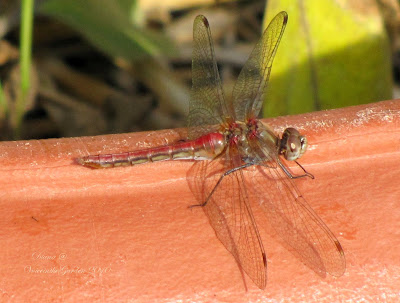